An "independent outsider" writes on the Campaign. 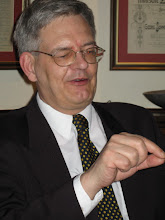 Ralf Grahn is a lawyer based in Helsinki who blogs on EU law and politics. Ralf has written two three thoughtful blog articles extolling the exciting prospect of the PES using primary elections to select our candidate for the Commission Presidency.

Ralf describes himself as an "independent outsider" to Europarty politics and his support for the Campaign for a PES Primary as his "first tentative steps." Here is further evidence of the capacity of this campaign to engage citizens outside of the PES political family.

Ralf writes, "A President of the European Commission with a stronger mandate from voters is not enough to turn the European Union into a parliamentary democracy, and it would not by itself institute politically accountable government at EU level, but it is a step in the right direction, well worth campaigning for and deciding on."

EDIT: In his latest blog, Ralf also comments, "Is the PES a spent force or a renewable resource in the political landscape of Europe? The Campaign for a PES Primary is the most concrete and imaginative initiative for the Party of European Socialists to reconnect with activists and engage EU citizens ahead of the EP elections in 2014."

Ralf's two three blog articles can be read here, here and here.
Posted by Desmond O'Toole at 9:58 AM