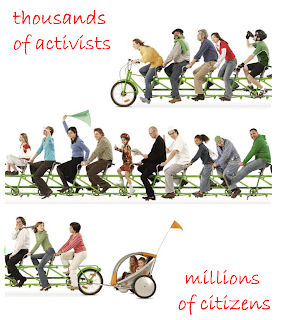 Thanks to all of your efforts we have now attracted 1,000 supporters to our Facebook page. This is truly extraordinary. It is less than six weeks since José and I launched the Campaign for a PES Primary and in this short time we have attracted massive support from PES activists and supporters across our political family. We have also attracted considerable support and positive comment from citizens outside of the PES. This is strong evidence for our claim that democratically selecting the PES candidate for Commssion President has the capacity to energise our party and attract huge support from the citizens we seek to represent in the European Parliament.

Later today we will be launching an on-line discussion forum that we hope will provide a platform for PES activists and independent progressive citizens to develop and refine our ideas for PES Primaries. Watch out for our announcement this afternoon!

Image "borrowed" from Confederation of Christian Trade Unions in Belguim (http://wp.me/pxa3n-iA).
Posted by Desmond O'Toole at 9:37 AM