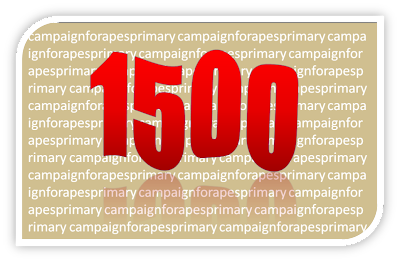 Over 1,500 supporters from all across Europe have now joined our Facebook campaign page. That puts us over half-way to our first main target of 3,000 supporters. It's great news and an indication of how important so many progressive citizens view the campaign to further democratise the Party of European Socialists.

The first big test for our campaign will take place next week when a campaign organiser will visit Brussels to lobby activists, MEPs, journalists and party officials on the Campaign for a PES Primary. The itinerary for the visit is as follows:

11h30 to 16h00   Meeting of the PES Network on Modernising Politics

This is the meeting at which a presentation will be given to PES officials and PES national party representatives about our call for the PES candidate for President of the European Commission in 2014 to be chosen by the individual members of the PES national parties in democractic primaries.

If there are any campaign supporters or other citizens interested in the campaign who want to meet with us during the visit to Brussels please contact us at pesprimary (at) gmail.com
Posted by Desmond O'Toole at 9:01 PM