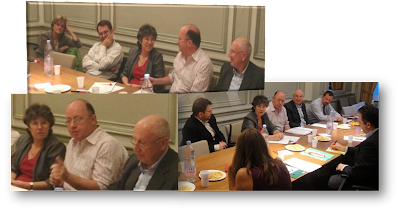 Desmond O'Toole was the principal speaker at a meeting of representatives of PES sister parties in Brussels on the 22nd September. The meeting was called to discuss the Campaign for a PES Primary and was ably moderated by Nicole Fondeneige (Parti Socialiste France) and Werner Wobbe (Sozialdemokratische Partei Deutschlands).

Desmond opened his speech with the words:

"Political survival is not compulsory. Democratic primaries to select the PES candiate for the next President of the European Commission are part of our political family's fight for survival in Europe. We cannot continue with business as usual, as if nothing has changed. We must open our party out to the people whose trust and support we seek and whose interests we serve. This means that to once more be able to change our world, we first have to change ourselves."

A lively debate then took place in which a number of questions were asked about how realistic it was to organise democratic primaries across Europe for the post of PES candidate for Commission President and whether such a process would ultimately be successful in engaging party members and citizens. Also raised was the question of how such primaries might be financed given the scale of the proposed electorate. Also discussed was the enormous opportunities that democratic primaries would open up for the PES to respond positively to the popular mood for transparency and inclusiveness that has taken hold across Europe. Primaries were one way of confronting the atmosphere of cynicism and despair about politics that is common in Europe today.

In conclusion, Desmond argued that:

"A political family that had built Europe's social welfare systems, introduced rights and protections for working people, championed universal public services like health and education, promoted equality between women and men and lifted so many people out of poverty and alienation could not now claim that it was unequal to the task of renewing itself. European social democracy must inspire every bit as much as it must be realistic. We must meet the demands of people to be included in the decisions that affect our lives. We must trust our own members and reach out to the citizens that we want to represent. Democratic primaries in the PES are one of the most important ways in which we can do this and so shape a new Europe that puts people first."